On day 5 of our vacation we headed to Buttermilk mountain, home of the winter X-Games and the junior mountain in town. Sure it’s smaller than the other mountains, but it still offered beautiful views from the top and wide open groomed trails. I practiced my turns while Derek took a few laps on the banked slalom course. The previous weekend Chris Klug raced to a gold medal finish in the banked slalom and suggested Derek try it out. It looked pretty fun, but I let Derek bask in the glory.

After another beautiful day on the slopes we headed back to the hotel, hung out in the hot tub and then got ready for our close-up. The Chris Klug Foundation is revamping the video they share with students across the country and they asked us to tell our story on camera. We are both pretty psyched to be able to help out, and hopefully when students hear our story it will inspire them to become organ donors.

After our movie star treatment, we went for a nice walk around town and settled in for our last night in Aspen.

On Friday morning we went back to the Aspen Art Museum and saw the new exhibitions that opened on Thursday night. It’s such a nice museum and we were glad to spend some more time there while we waited for our flight.

We got to the airport a little early, and figured we’d just relax in the waiting area. It soon became clear that the plane that needed to land in order for us to take odd was not going to make it. The flight was diverted to a nearby airport and we were told it would take off and try to land again soon. After about 20 minutes everyone’s hopes were dashed: our flight was cancelled. Aspen airport is one of the most dangerous airports in the country due to the high winds and unpredictable weather. Better safe than sorry. We went back though security to get our ski/snowboard bag, I rebooked our flight for the next day on the super handy United Airlines app, and then called our hotel to see if they still had a room for us. They happily welcomed us back and we made our way back downtown on the bus. Once we checked into our new room we decided to treat ourselves to a fancy dinner.

Beth from CKF mentioned a place that had a great and affordable bar menu. As you can imagine, Aspen isn’t really known for affordable, but L’Hostaria’s bar menu is budget friendly. We bellied up to the bar and were greeted by Scotty the kiwi, who we soon learned is somewhat of a celebrity. A gentleman on his way out recommended the angel hair pasta and we took his advice. The restaurant filled up fast and we made fast friends with a couple who had moved to Aspen the previous May. They were very fun and silly and we had a great time hanging out with them. This was apparently one of their favorite places to go for dinner and Scotty knew them well. Derek liked the angel hair pasta so much, he ordered another entree, the pasta carbonara. I had the bolognese and we both agreed it was the best pasta either of us had ever had. Perfectly cooked and seasoned, we’ll be dreaming of that pasta dinner for a while.

While it was inconvenient to be waylaid in Aspen, I’d be lying if I said I was upset we got an extra day of vacation. We also had the opportunity to watch the finish of the Elk Mountain Grand Traverse. It’s a 40 mile race that starts at midnight in Crested Butte and ends at the Base of Aspen mountain. It’s completely nuts, so of course Chris and his friend Jon Gibans did it. We made it to the finish line a few minutes after they did.

We ate lunch with Chris, his wife, their two kids and Jon. And as soon as Chris finished his cheeseburger he fell asleep at the table. Poor guy was exhausted. After lunch we made our way back to the hotel, Chris and his family went swimming and Derek and I said our goodbyes and made our way back to the airport. I won’t bore you with the details of our airport experience, I’ll just say we finally made it home.

Buttermilk: Home of the X-Games

View from the top of Buttermilk. 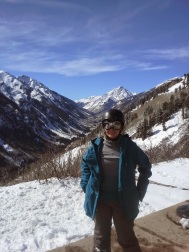 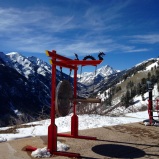 Another view from the top of Buttermilk.

Lounging in a giant chair.

Our last night in Aspen…or was it?

We spent a good portion of Friday at the Aspen museum. 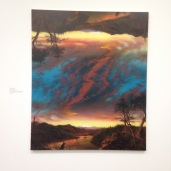 Everything is going to be all right. 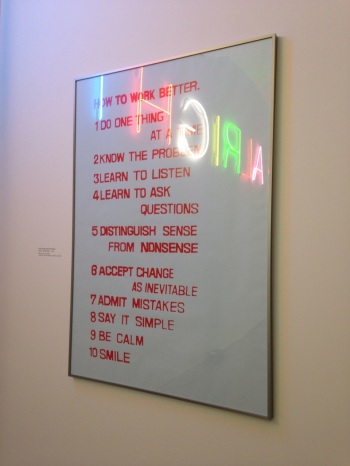 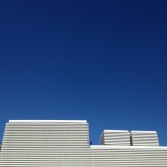 No filter on this super blue sky. 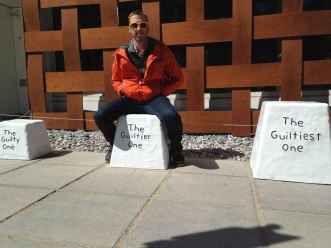 Art you can sit on, courtesy of Miranda July. 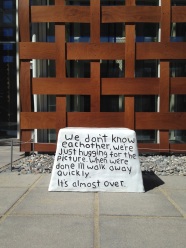 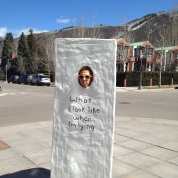 People watching at the base of Ajax.

Killing time until our flight.

And…our flight was cancelled due to weather.

View from our new room! 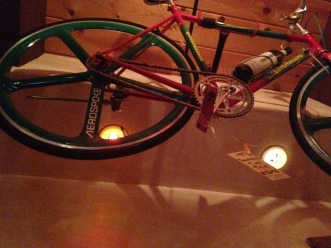 Bonus night in Aspen meant a trip to L’Hostaria. 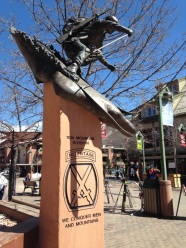 Watching the finish of the Grand Traverse. 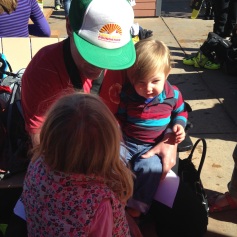 Chris reunited with his kids Bali and River. 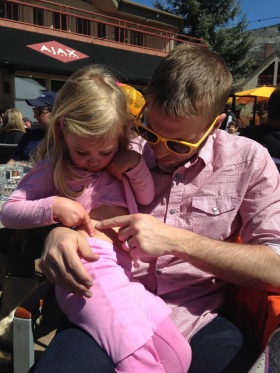 Chris was a little tuckered out after his 40 mile walk home.

Night falls in Chicago. Finally on our way home.

One Reply to “Vacation Recap: Part 3”