Logan, Kathleen and I were first in our respective divisions. But I couldn’t help but look at the entire population of finishers to see how we compared to the rest of the field.

Before travelling to Aspen, one of our friends warned us that there are only three types of people there: current Olympic athletes, former Olympic athletes, and wannabe Olympic athletes. Chris Klug even mentioned that he’ll be riding down the road on a training ride and be passed by a 60 year old like he was standing still. The plot of times confirms that for me:

The vast majority of all people were finishing in under 1:40 (100 minutes).  The “book time”, i.e. the typical time used for hiking which is 30min/mi with an extra 30min/mi for every 1000 feet of altitude, for this hike is 2:57 (177 minutes)! Almost everyone was MUCH faster than ‘normal’ hiking time. This is what I’ll start calling the ‘Aspen Effect’.  I would expect some skewing to be faster than book time, since faster people are more likely to participate in such events, but there should be a decent population supporting the cause as “recreational hikers”.  There’s aren’t too many of those people, and it puts Logan and Kathleen’s time of 3:28 into better perspective:  Although they were the slowest, it wasn’t far off from ‘normal hiking’ time! [I guess we should have been ‘racing’ instead of ‘hiking’. That darn altitude.]

The competitive division was supposed to be for all participants who expected to finish in under 2 hours (120 minutes). The fastest hikers were at a 10min/mi pace with and extra 10min/mi for altitude. That’s 3x normal hiking pace! There are no finishers in the competitive division that finished in over 1:40 (100 minutes), and it was supposed to be for all finishers who expected to be in under 2 hours.

People who were obviously fast were in the recreational division and didn’t listen to the registration information, or didn’t know how awesomely fast they would be. I don’t blame them – finishing early gave them more time at the top to enjoy the lasagne and free alcohol! The following plot is how people actually crossed the finish line: Recreational entrants started an hour earlier than competitive entrants: 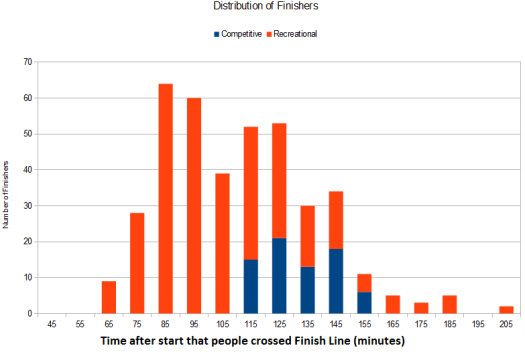 Almost everyone turns blue!  The Aspen Effect at work again:  Everyone is fast, and there are very few recreational entrants living in Aspen.

One Reply to “Summit for Life: Part 3”