TL;DR —-> We hiked up most of Cannon on Saturday and it was fun and challenging. Feel free to skip to the pictures. If you’ve got some time to kill, the full hike report is below. I am supposed to be doing homework, so of course I’m writing a nearly 1200 word essay on our hike instead.

Our plan last weekend was to hike Cannon Mountain, but as we mentioned, homework got the better of both of us. This weekend, we were determined to make the hike happen. When we arrived at the base we realized that last weekend was the last weekend the tram at Cannon ran until ski season. That meant we would have to hike up the mountain and back down the way we came. This did not seem like that big of a deal. I prefer loop hikes that offer one kind of terrain for the ascent and another for the descent. Or to put it another way, I don’t mind a technical climb up with a modicum of scrambling up rocks, but I sure as hell don’t want to do that on the way down.

The hike up Cannon gets your heart pumping right away; there’s a lot of vertical to go up in a relatively short period of time. Derek led the way and I followed. About a half mile into the climb, the terrain changed a bit. We had to navigate up some rocky parts and we were in some cases going up a sluice-like trail, or something out of an Indiana Jones movie: if water––or a giant boulder––were to suddenly be released from the top of the mountain, we would have been goners. Or taking a positive outlook, if it was water we’d have been in for an adventurous slide down a mountain ala that scene in The Goonies. That lasted for a bit and then the terrain changed again. Now we were gingerly choosing our foot placements as we traversed what was once a dry creek bed. It rained pretty hard the last few days and we were treated to many little waterfalls. No big deal, it was easy to sidestep the major puddles, and although most of the rocks were covered in leaves, neither of us had much difficulty finding a path that worked.

At some point during the hike, I decided to turn and look down the path. This was when I remembered that we would be taking the same route back. I began to get a little worried. We were not that close to the top and my legs were getting tired. If you’ve ever gone down a steep mountain you’ve no doubt experienced what I like to call “newborn horse legs”. Your legs work but they get so wobbly that making a graceful descent is just not possible. Derek was mountain goating up the trail, and so I put the descent out of my mind and kept following. I was having a good time. Technical climbs are pretty fun, and I like that I can take my time to find the best route. Derek said picking the route is kind of like a game of Jenga.

This hike has a false, yet beautiful, summit. It looks out over the notch and you can see 93 like a snake slithering through the mountains. There are plenty of rocks to sun yourself on and it’s a great place to have a snack. I propped my head up on my pack and closed my eyes for a while. It was a cool day, but the sun was warm and I was pretty pooped at this point. When Derek suggested we continue to the true summit, I willingly obliged. At first the trail is a traverse which was good because it was relatively level, but bad because that meant major mucky mud sections and big puddles. Again, it was like a game and we muddled––pun!––through. After we passed a group coming towards us, the trail opened up and began climbing up again. My worry returned as the fatigue in my legs became a little more obvious. I asked Derek how much further and before he could answer I noticed the building in the distance that was at the true summit. No way. No way was I going to be able to get to that summit AND hike down safely. If you know Derek, he is quite determined to finish what he’s started. I told him to go on ahead and that I would either catch up eventually or just camp out on a rock and wait for him. He hesitated, but I waved him on and kept hiking up, albeit slowly. A few moments passed and he was coming back down towards me. The clouds were starting to look a little menacing and he too was remembering the climb down. We sat on a rock and ate an apple and a sandwich and felt the air growing colder. This mountain wasn’t going to hike itself and so we started to make our way back. By the time we reached the false summit again, my legs were almost in full newborn horse phase. I took my time and chose my path carefully. I slipped a few times, so did Derek, but neither of us got hurt. A few times we stopped and took a rest on a rock to have a snack and drink some water. On one of these occasions, a couple hiking up said we looked like we were waiting for a bus. I fantasized about a bus picking me and my wobbly legs up and carting me down the mountain.

We made it to the bottom, both of us in one piece. I know Derek was disappointed in not making it to the true summit, but we got a great hike in all the same. What’s that cliché about things not being about the destination, but the journey? Something like that. Derek told me that his body feels transformed. Like it’s traveled back in time to when he was in high school and he could push it to the brink with little or no consequence. On Sunday I walked around stilted, stiff legs and sore knees. It feels good to be that kind of sore, but man does it hurt. I sat down to do some writing yesterday afternoon and when I got up to get some water, I nearly face planted. In contrast, Derek took the opportunity on Sunday afternoon to run 3 miles. It has been roughly five months since his third major abdominal surgery and his second liver transplant and he’s hiking mountains and running for miles. Science is just amazing.

Here are some photos from the hike. 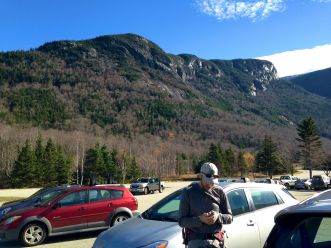 Pretty view from the parking lot. 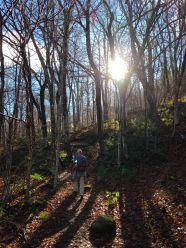 I call this part the “Indy Sluice”.

Taking a peek at an obscured view. 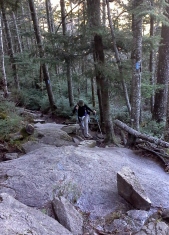 Almost to the fake summit!

The view is pretty awesome.

I-93 seems kind of pretty from up here.

Walking back to the car. 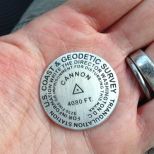 We bought a souvenir.