Before I launch into the weekend’s festivities, I would like to share something a friend of ours made. In April of 2013, when Derek went through all the tests to see if he was eligible for transplant, I mentioned our situation to Todd Bookman, the health reporter for NHPR, and our friend. He was interested in potentially doing a story about us, so we continued updating him as Derek’s health deteriorated. After the bleeding esophageal varices incident of 2013, it became apparent that a transplant was imminent. Todd interviewed us several times, and had us take recording equipment with us when we went to appointments at Lahey. He even recorded a conversation with Derek at the hospital, two days after surgery. When he came to my room, I made him tell me a story because I wasn’t really up for talking at that point. After collecting hours of audio (poor guy!) he put together a three part series about us for NHPR that finishes airing today.

We both think Todd did a great job of telling our story, but there are definitely parts that are hard for us to hear. We wanted to be as honest as possible when he interviewed us because we truly hope it might help someone else one day. In many ways, we were more honest during the course of those interviews than we have been on this blog. Todd turned into something of a surrogate therapist for both of us, which I think is the mark of a truly talented reporter; we were comfortable being honest with him. As I am sure you can all imagine, there are emotional parts to the story, but there is also a lot of silliness. Here’s a link to the three parts: A Husband, A Wife, A Liver.

Now, for the weekend! My sister Dehbi traveled east from Missouri to visit us and act as our personal trainer for the weekend.  Derek and I successfully went on our longest hike to date, and we can thank Dehbi for encouraging us the whole way. Dehbi and I also got to celebrate both of our birthdays, something we have not done together in many years! We had a fun-filled weekend, and now I will let the photos do the talking. (Click on any photo to launch a slideshow.)

Waiting for the birthday girl at the airport! People were pretty jealous of our party hats. 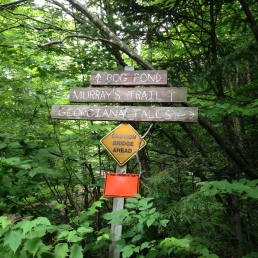 Georgiana Falls was a great hike.

A perfect spot for a picnic lunch.

Happy liver is happy to be on a hike.

Swirling something in the water is beautiful and maybe toxic?

Derek and Dehbi waiting for me to hop in the timed photo. 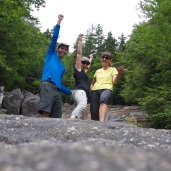 Sideways tree in the gorge.

Lighting at the gorge was perfect!

Lots of signs about a man who fell down a few years ago.

If you stand in just the right spot, you can see where the Old Man of the Mountain used to be. 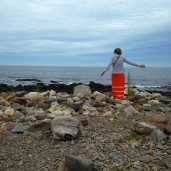 Dehbi having fun on the rocks at Odiorne State Park.

Birthday ‘muffins’ with hand cut stencils by Dehbi. (Derek thinks that if we call them muffins instead of cupcakes they’ll be healthier.)

Transplant Games of AmericaJuly 17th, 2020
Oh my goodness. We have less than two years to train!