This week’s brew is River City Root Beer from Blue Dog Beverage, LLC in Sacramento CA. Their website says it’s an expired domain name, and the facebook page hasn’t had a new post since March.  Not a good sign. I hope this isn’t a tasting of a now-extinct root beer. In an earlier post, I found the Chicago Root Beer website in a similar state, but am happy to report at least their site is back up and running. 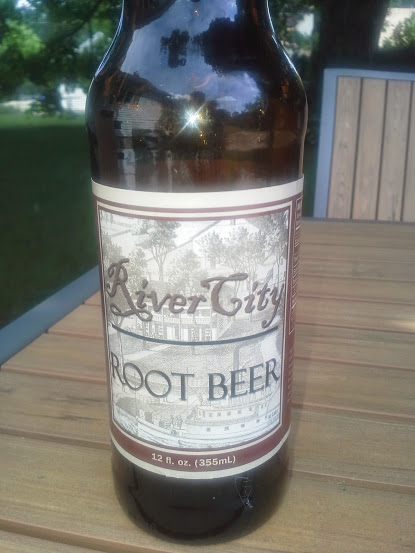 The root beer smelled like a good root beer. Logan said: “Now that I know there’s wintergreen in root beer, I can’t smell anything else.” There wasn’t too much of a head, but it was bubbly. I took a few sips and thought it was very good. My only complaint was that it was too bubbly, and it’s not something you can chug. Not that you want to, need to, or should chug root beer. Logan disagreed and thought it was a good amount of fizziness; she is a big fan of fizzy drinks. I let the root beer warm to room temperature and the fizziness diminished, and then I thought it wasn’t fizzy enough. I guess I’m just fickle about fizz and don’t know what I want.

We both agreed it was an extremely good root beer. It appears that I’ve been on a 4 week streak of very good root beer. It’s hard to remember the subtle differences between the top ranked root beers. Once it gets to the upper-echelon, I would buy any of the past four that are available. This one is being ranked above Americana – that brew had a little more zip of flavor whereas this one is just a solid, “good tasting, root beer barrel candy flavor” – Logan’s words. I agree, and if I were in a store that was offering both and I could only buy one, I would go for River City, since I’ve only had it once and I would like to try it again.