Chicago Root Beer is this week’s review. It receives low marks on the website access department – the chicagorootbeer.com website had an error and wouldn’t load.  Whoops! Through the magic of Wikipedia and the twitter handle of their parent company, @coolmountainpop, I found out that the Chicago Root Beer recipe includes caramel, wintergreen, cane sugar, and Lake Michigan water. Plus, it’s available in kegs! 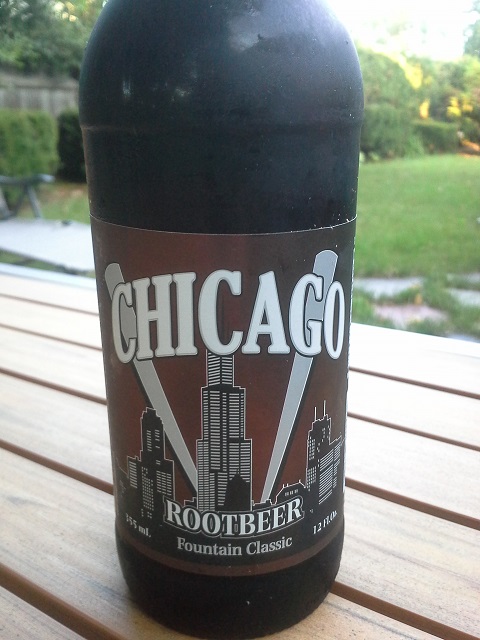 Logan: Not much fizz.  Now that you know there’s mint in it, can’t you taste it?

Derek: Yes.  It doesn’t taste like root beer, or how I expect root beer to taste.

Logan: It’s pretty good, I like it but it could use more fizz. I like a root beer with lots of fizz.

Derek: The bottle made me think I was drinking a stout root beer – the dark bottle, dark label, and a jet black cap. Even when pouring the root beer appeared darker than a normal root beer, or at least that’s what my brain perceived. It could just be the mind games that Chicago Root Beer is playing with me.

It was a very good tasting root beer.  Logan would like more fizz, but liked the flavors. I thought the flavors were good, but not fully Root Beer-esque. It could have used some more oomph of sassafras type flavoring. I would likely buy this root beer again, but it’s not the exact root beer flavor that I’m looking for.

Here are the rankings so far. Feel free to copy and paste into excel to make your own chart. I suggest you import using first column fixed width of 3 characters.

In doing a search for “Chicago Root Beer” in Google, I found that their addrees is the same as Filbert’s Root Beer:  3430 S Ashland Ave, Chicago, IL.  I’m not sure if this is the address of a bottling company, a google mistake, or they are the same company.  I need to go through my root beer stash and see if I have a Filbert’s and compare.