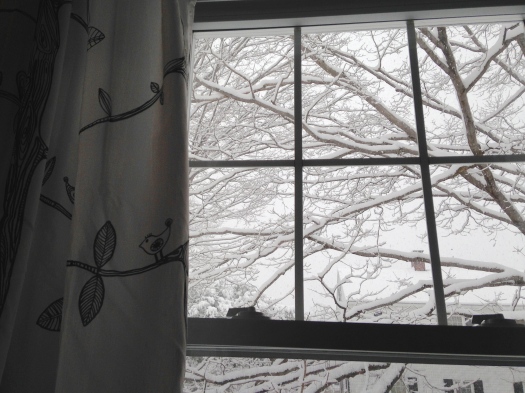 It’s snowing at a fairly good clip here at Chez Janiannon (or Shanniak depending on your preference) so we’ve decided to make a little more progress in my office by hanging some curtains. I thought it might be nice to listen to an episode of Radiolab while we worked and managed to pick an eerily appropriate one. In the first act they discuss how sedation works. Or rather, how they think it works. You can listen to the show if you click on the Black Box link below.

Derek has discussed his experience with sedation here, here and here. My experience with being put under is limited to two occasions. The first was after both of my eardrums ruptured and I had to have tubes put in my ears and my adenoids removed. I was probably five or younger, so I don’t know if I actually remember throwing up when I came to, or if I just remember my mom telling me about it. The second time was when I had all four impacted wisdom teeth removed when I was in college. I went to the University of Iowa dental school because the surgery was a fraction of the cost it would be if I went to an oral surgeon.

What I remember from that experience was attempting to hold my breath to avoid going under. The doctor was asking about what I was studying and I told him metalsmithing. He said something like, “Oh, do you work in chrome?” I rolled my eyes, took an exasperated deep breath in so I could tell him how silly that was and then I was out. When I came to, I was confused as to why they had not begun the procedure and why my head hurt so much. He later told me that he had to brace his foot against the chair in order to yank my teeth out of my head. I assume that was hyperbole. As I was leaving the dental school, I remarked to my boyfriend at the time, in a low whisper so no one else would hear, “Oh. Hang on a second. Was I just in the Death Star?”

He said, “Yes, of course you were, don’t you remember? We barely made it out alive,” and then he bought me a strawberry milkshake. When I arrived home, I called my mom, told her it went fine, burst into tears for no apparent reason and then proceeded to throw up all of the pain meds I had just swallowed. So that’s two for two for vomit after anesthesia. I have told everyone who will listen at Lahey that the chances of me throwing up post operative are quite high, and they’ve assured me they have a way of ‘dealing’ with it.